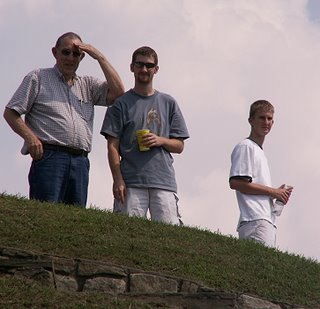 The Saturday after labor day is Mound Festival, an open air arts and crafts festival centered around the most famous landmark here in South Charleston, which is an Indian Mound. Historians say it was build by the Adena Indians in the distant past. After a stop at the hotdog stand I followed my Mom and Julie through the maze of booths at the bottom of the mound while the other Waggoner Men, My Dad and sons, Brandon and Brian climbed to the top of said mound. Having my digital camera at the ready I captured the image above. (in the old days “taking a picture” was called making an exposure – now in the digital age it is “capturing an image”). Any way as I looked at this picture –I mean image– I was struck that this was the generation before me and after me. I guess now that I am firmly in the clutches of middle age I think more of this kind of thing. I am reminded that so much of what I am has been shaped by my parents and so much of my children has been shaped by me. The former brings gratefulness for all that my folks have done for me. The latter thought is a rather sobering one. I am trusting that the Lord will make up for my deficiencies, as they are many. My prayer for my sons and my daughter is that they will walk with God. I have not always done so, but I have learned in the first half of life that waking with God is not only right it is also practical. In my line of work you encounter many who have been left as damaged goods due to the destructive path of disobeying our Heavenly Father. So to my kids and anyone’s kids –walk with the Lord!

“My son, hear the instruction of thy father, and forsake not the law of thy mother: For they shall be an ornament of grace unto thy head, and chains about thy neck.” (Proverbs 1:8-9)