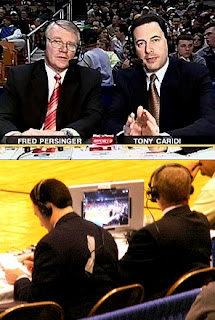 There is a side of me and you that we present to the public. It is a carefully crafted image, one that is constantly refined, reviewed, tweaked and tended. We want to appear better than we really are. I was reminded of this by the following…

Brian and I recently attended the WV State High School Basketball Tournament at the . The game was carried statewide on television. While I was snapping a few pictures before the game – I got one of Tony Caridi (The Voice of the Mountaineers) and Fred Persinger getting ready to do the play-by-play (the top pic is from the TV broadcast). I couldn’t help but notice that a wire was held to the back of Tony’s suit coat by a large and rather ugly strip of duct tape. I really don’t think Mr. Caridi normally uses duct tape as fashion accessory. I am sure it was intended to keep the wire under control, after all what TV personality wants an out of control wire to contend with while you are talking to the sports-craving masses? I also noted that the duct tape was wisely placed out of the view of the TV cameras.

Don’t we also hide the ugly strips of stuff hanging on us? We are trying to protect our image for the masses who, for the most part, really don’t care. It might be better strategy to work on who we really are. The part that God sees clearly. The part that no makeup, clever phase or insincere smile can cover. I want to seek God’s help to strive to be authentic with others and particularly with Him. By the way could see if there is any duct tape on my back?

“Neither is there any creature that is not manifest in his sight: but all things are naked and opened unto the eyes of him with whom we have to do.” (Heb 4:13)