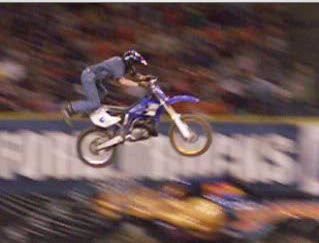 Brian recently had a birthday and for his birthday, his dear ol’ Dad gave him two tickets to the Monster Jam – Monster Truck Show at the Charleston Civic Center. We arrived in the arena ready with our hearing protection (a must if you go) to enjoy the show, yes there were monster trucks crushing cars, there was Grave Digger (the greatest monster truck of all time) spinning donuts in the imported dirt of the civic center floor, there was even Dragonator – the fire breathing, car eating dragon! There was much noise, much hype, much dirt, much fumes and at for one father-son combination– much fun. As an added attraction there was demonstration by four professional moto-cross riders who did wheelies and tricks and jumps on their bikes. The picture above is of one rider demonstrating one of the most impressive manuvers – the superman seat grab. The rider zooms up a short, steep ramp and while he flies through the air he slips off the bike until he is only holding onto the seat and fully extends his body and flys – superman style. If you want to see for your self take a look at this Video Clip (real media). I have never met a real professional moto-cross rider but when I do and we get to talking about the superman seat grab, I really only want to ask one question: Why?

I can only venture a guess at the answer – some possibilities include: The thrill, the money, the adrenaline rush, the fact of doing something that is beyond the ordinary. Motorcycles were not originally designed to jump through the air. Back in the day, Evel Knievel invented the “sport” of motorcyle jumping and went beyond the normal and look at where we are now, and I don’t think even the “King of the Daredevils” ever did what these kids did. Maybe extreme sports just brings out an aspect of human nature that causes some to push beyond the bounds of normal experience or at least brings out those who gaze at Evel riding the Skycycle over and ultimately into the Snake River Canyon or those who plunk down $17.00 to watch young men fly and cars get eaten.

For the most part, life is lived within fixed boundaries, between narrow margins. It is not ordinary to become Superman and fly. Except for fleeting moments we are almost exclusively grounded. Yet we long for escape from such limitations. We are limited by the laws of gravity, physics, and time. We may push against the limits and seemingly bend the rules but in the end we come back to earth and back inside the sidelines of life. Since this is the case I have come to this conclusion – the secret to joy and happiness is not in stretching the boundaries, it is in finding contentment within them. This is a learned behavioral response, but it can be learned. Paul said it best: “I have learned in whatever state I am, to be content.” (Phil 4:10). With God’s help I want to keep on learning to be content too.