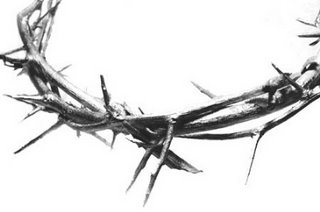 “They stripped him and put a scarlet robe on him, and then twisted together a crown of thorns and set it on his head. They put a staff in his right hand and knelt in front of him and mocked him. ‘Hail, king of the Jews!’” (Matt. 27:29)

What kind of perverse mind would have thought of it; yes the would-be ruler needed to be taught a lesson, but how to do it….let’s see…a king wears a crown….then a quick glance at nearby thorn-bush and the plan was hatched. The king would wear a crown of thorns, what a clever, ironic, cruel and spectacular stunt. Quickly murderous hands wove the branches in the wicked circle and it was rammed into Jesus scalp.

The mind behind the hands never realized that thorns were not always part of creation, they were a direct result of sin…(“Thorns also and thistles shall it bring forth to thee;” Gen. 3:18) and that portion of sin’s curse was wounding the single sinless one as he was dying for the sinners that was everyone else. It was not a warped sense of humor that conceived the crown of thorns it was a message delivered, that declared it was grace, love and mercy which drove our Savior to accept the curse of sin so that I could ever go free. What wonder, what a matchless gift.

Question: What fitting tribute can I offer today to express my awareness of the gift of Jesus?