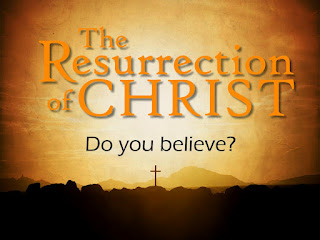 Not far from the banks of the Little Kanawha River is a white church with the customary steeple and bell to be rung every Sunday morning.  It was in this place that so much of my journey of faith began.  It was also the place where I first learned of the significance of the resurrection of our Lord.
One year, for some reason, the church fathers decided to allow the youth group to be in charge of the Easter Sunday Sunrise service.  The Sunrise service was a long standing tradition.  To start the day, we would meet for a service extra early on Easter Sunday, then gather in the church basement for a full breakfast (including the best sausage I can ever recall eating).  This was all followed by Sunday School and preaching like any normal Sunday, except the boys were extra scrubbed and combed and the girls wore a higher percentage of new spring dresses.  We decided that a drama was in order and went to work with staging and costumes and special effects.  Never mind that the staging was a few fake palms, and the costumes consisted of bed sheets standing in for angel robes and flip flops for first century sandals.  We did go all out for special effects: we borrowed a stereo system and hid the speakers behind the piano and organ and at the precise moment we needed thunder roaring from the sky, someone was to drop the needle onto an LP record that contained the appropriate boom.
When on that Easter Sunday the drama was presented, the record player thunder sounded on cue, bath- robed women came to the tomb, a tinsel-topped angel announced Jesus was alive in front of a chicken wire painted paper covered tomb, and then the highlight — a fake-bearded, very non-Jewish looking Jesus made a glorious post-death appearance.  We did stop the story short of the ascension as we could not figure out how to get Jesus to zoom off into the sky.
As I think back on that decades ago makeshift reenactment of the resurrection, I also note that there is a more mature aspect as well.  In a very real sense, the followers of Jesus continue to reenact the resurrection. The Apostle Paul put it this way: “Therefore we were buried with Him through baptism into death, that just as Christ was raised from the dead by the glory of the Father, even so we also should walk in newness of life”  (Romans 6:4).  A new life is a major theme that is woven through the Christian faith.   We were once lost but now are found.  We describe salvation as being born again.  We describe the transaction of trusting Christ as conversion.  We take off the old and put on the new.  Just as radical change took place in Christ at the resurrection in passing from death to life, we too are all about radical change.   Just as He was changed, so are we.  We can follow in the shadow of the resurrection.
The Scriptures teach that our eternal destiny is determined by our faith in Jesus’ death and resurrection, and so is our current life. If we have been made new in Him we need to live a new life.   We are to be dead to the old life of sin and selfishness and live a new life of bringing glory to Him.
This Easter, and every other day, we have some reenacting to do.