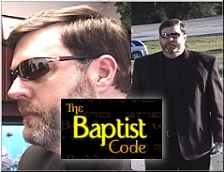 “To the weak became I as weak, that I might gain the weak: I am made all things to all men, that I might by all means save some.” (1Corinthian 9:22)

Over Thanksgiving weekend I had my acting debut, I was asked to guest-star in Brandon’s newest video production. It was a project for a video course he is taking in college. He choose to spoof “The Da Vinci Code” with one called “The Baptist Code.” I get to play the pastor of a church that is not exactly open to change. The video also features, Brian, Jessica and Brandon’s friend Matt. There is lots of silliness and it is all played for laughs but is kind of like the old Joke: How many Baptists does it take to change a light bulb? Answer: Change who said anything about change?” Anyway this inflexibility is not just a condition of those who go to churches that have a particular denominational label on them.

We who are followers of Christ face a seeming dilemma. In some areas we are to be completely inflexible. That which is clearly revealed in the Word of God is to be defended. However we can defend our areas of preference at the same level and in essence make non-absolutes, absolutes. Our opinions or prejudices can become dogma or on the other hand the truth can be compromised for pragmatic ends. So where is the balance? I am impressed with the Apostle Paul. He would allow himself to be stoned or run out of town rather than back down on the truth, while at the same time was more than willing to give up the eating of meat or shave his head in order to complete his ministry. So how does one come to understand where to draw the lines, where to be unmoveable and where to bend? While this answer and its biblical basis is beyond the scope of this essay, I would offer one bit of advice: Take a look at your motivation. The Pharisees the most over inflexible people in world history were wrongly motivated. They did what they did or what they did not do to make themselves look better. They were motivated by human pride rather than glorifying God. When I can set aside my selfish desire to be king of the mountain and focus exclusively on making a big deal out of God, I usually can find the way. Try it, it no doubt will work for you too.

Use this link if you would like to view “The Baptist Code” video.