The evening of Thursday June 23, 2016 into the morning of Friday June 24 more than 9 inches of rain fell in 9 hours causing flooding in a large swath of West Virginia.  We had been watching the weather reports the day before and knew that flood warnings had been issued.  I was awakened early Friday with a report that the Mt. Calvary parking lot B was flooding and our 32 passenger bus was surrounded by water.  A half hour later I had waders on and got the bus.  God was taking care of us for the bus was on a slope and the engine was still above water.  It started up and was quickly on higher ground. 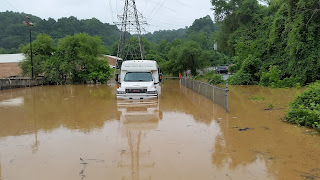 parking lot B on the morning of June 24
The weekend confirmed that this was a major event. On Sunday morning we prayed as a church for God to give us direction as to what He wanted us to do to help our neighbors up the Elk river. On Monday I had two phone calls from groups looking for a place to house relief workers –both were not suitable for our location or facilities.  Late in the afternoon Tim Haas, the manager of US Disaster Relief for Samaritan’s Purse was knocking on our door.  Within 20 minutes a quick assessment was made and an invitation was extended for Mt. Calvary Baptist Church to be the host site for relief effort in this part of West Virginia. 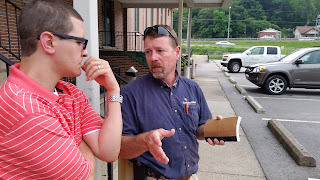 Pastor Adam Stotler and Tim Haas – June 27
By Tuesday morning Samaritan’s Purse confirmed a Disaster Relief Unit was coming and I was asked to accompany a team doing an ariel survey in Samaritan’s Purse Helicopter.  We met our ride at the baseball field beside Elkview Middle School.  Our pilot told me I would get some good pictures as the door had been removed where I would be sitting — he was correct.  I was also told that my job was to also watch out for power lines hanging across the valley!  From the air it was clear that the damage was extensive. We counted more than 300 homes that had apparent signs of damage.
States Pics 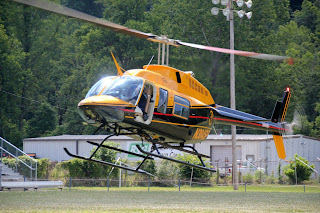 Samaritan’s Purse Helicopter – Bell 206L
A Story:  We flew over a section of the valley north of Clendenin that was cut off due to Rt. 4 being completely washed out.  As we banked between the twists and turns of the valley I saw a man in his 40s, shirtless, all of his household items piled in the yard standing on his front deck.  He looked up at me with both arms out stretched as if to say “would you please help me.”  I don’t recall ever feeling more helpless.  I prayed a quick prayer that God would send help.  Little did I know that in the next 8 weeks the Lord would send 1152 volunteers from 26 states to help those in need. 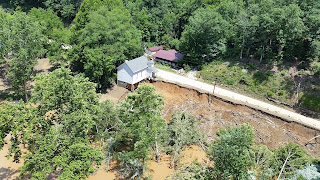 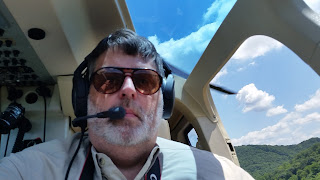 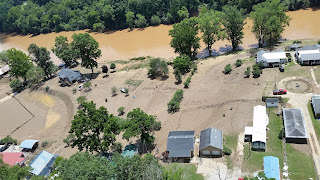 Wednesday the DR Unit arrived -a state of the art self-contained facility with office, shop storage, elevator, and satellite communications. A shower trailer also arrived as well as a small fleet of smaller vehicles. 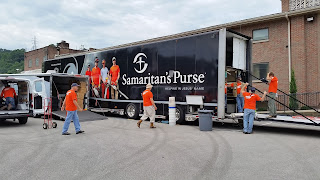 By Friday a small army of volunteers were being trained, fed and housed throughout our church.  The transformation was amazing to watch and the organizational skills of the leadership team was impressive. 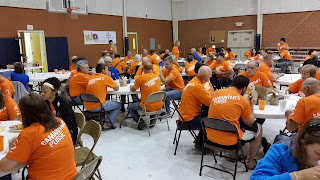 Other adventures awaited as we were part of the distribution of relief supplies sent from Kansas City to assist victims in Clay, WV. 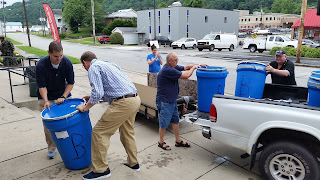 Supplies bound for Clay, WV
On July 7 the nationally known Kingsmen Quartet came and did a benefit concert for a packed house. The sounds of gospel music also provided a welcome break for tired workers. 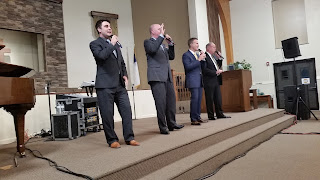 The Kingsmen Quartet at Mt. Calvary Baptist
Kingsmen Video
WSAZ news story about benefit concert
I also had the opportunity to accompany Kenny Kemp and Lori Kersey to a work site and host them as they observed the work from our host-church location. WSAZ also did a story about the ministry. Both were a great opportunity to let others know of the work so many were doing for the hurting in West Virginia.
Charleston Gazette Mail Article
WSAZ News Video 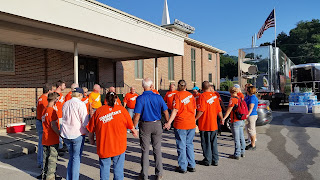 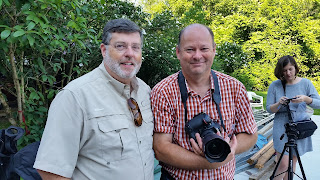 Samaritan’s Purse workers pray before leaving for a day’s work
Me, Charleston Gazette-Mail Photographer Kenny Kemp and reporter Lori Kersey
I can’t say enough about the volunteers (below is a picture of more than 90 who arrived by 7:30 am on a Monday morning to go to work). For many this was one of many deployments that they give their time and talents to serving.  It was blessing to have many “orange shirts” and “blue shirts” in our services on Sundays.  Worshiping with so many, from so many places, from so many backgrounds, but all worshiping our Lord was a small bit of heaven.
Samaritan’s Purse worksite Video 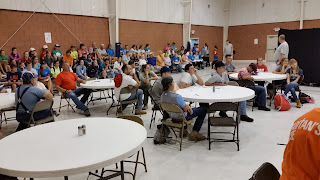 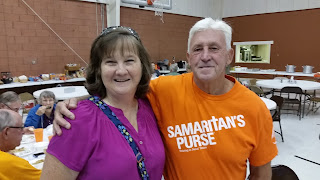 Working alongside of the Samaritan’s Purse staff and volunteers were chaplains who form the Rapid Response team.  These loving servants pray, encourage and witness to those who are being helped by work teams.  I heard story after story of lives changed due to these.  19 people came to know Jesus as their Savior, many more rededicated their lives to the Lord. 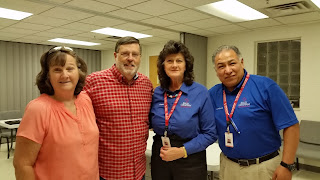 Julie, Me and Chaplains Carolin and Desi Perez from Oklahoma 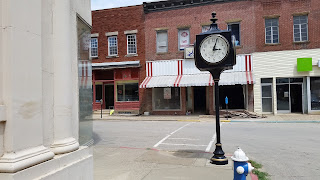 The deserted downtown of Clendenin after the flood
In the midst of the devastation we saw signs of God at work. Below is just a portion of more than 300 fully packed school backpacks donated by the folks at Lewis Memorial Baptist Church, then we helped distribute to three relief centers in the flood areas.  Lewis Memorial folks also assisted our own volunteers who came early in the morning and in the evening to assist with meal preparation and service. 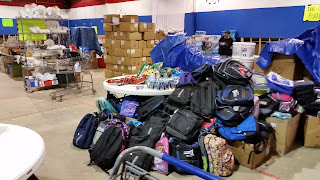 School Backpacks
On Saturday August 6 I had the privilege of working alongside others from our own church in one of the teams that was composed of our own people.  This gang worked hard in doing a mud-out on a flooded home in the Elkview area.  Not only did the homeowners have a restored home, they were also left with the message of how Jesus can restore a life for eternity. 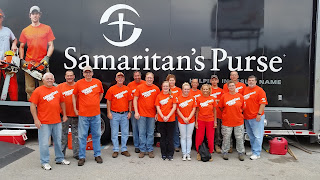 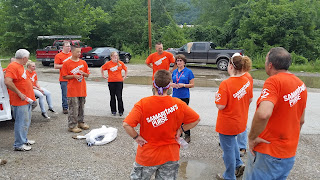 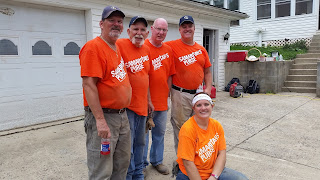 work team in Clendenin
For me as a Pastor, for our staff and congregation these 7 weeks have been transformative as we have seen God at work in amazing and unexpected ways. For the volunteers housed at Mt. Calvary, each day began with breakfast and morning devotions, after a full day at the work sites the day concluded with dinner and a sharing time.  Staff and volunteers were invited to share their God-moments with the group.  Person after person shared ways that God was inserting Himself into the lives of all concerned.  For this I give Him credit and thanks.
Today is August 17. It is exactly eight weeks after the DR unit pulled into our parking lot.  This afternoon it pulled out and is headed south.  It will quickly be put into service in Louisiana and Mississippi where unprecedented flooding has occurred.  God will continue to work through His people there as he has here.  Much work remains to be done in many communities throughout West Virginia and we must all continue to do all we can to finish the task of recovery.
This morning at the last group breakfast I had the opportunity to share the Word.  I shared from 1 Cor. 16:15 where Paul called out a family whose members were “addicted to ministry.” (KJV). The 1100 staff and volunteers that came through our doors were certainly addicts.  As many went out the door toward their cars this morning they spoke of expecting to see each other at the next deployment. I hope I can continue to serve with ministry addicts and be one myself. 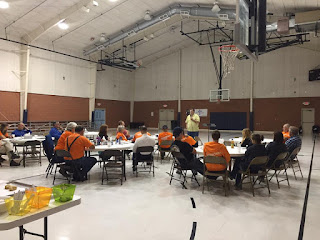