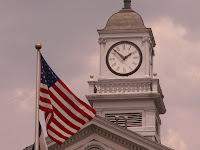 June 14 is Flag Day, while not an official Federal Holiday it does commemorate the day in 1777 that congress adopted the United States Flag. In 1916, President Woodrow Wilson issued a proclamation that officially established June 14 as Flag Day and in August 1949, National Flag Day was established by an Act of Congress. The week of June 14 is designated as “National Flag Week.” During National Flag Week, the president typically issues a proclamation urging U.S. citizens to fly the American flag for the duration of that week. I never tire of seeing the Stars and Stripes flying and so appreciate all that our Flag represents of our great nation.

Psalm 60:4 tells us that God has given us a Banner (flag) of truth. It is our allegiance to the truth that should be on public display before an often skeptical world. In addition to our study of the Word to understand and know the truth, we must also live out God’s truth every day.

So get your flags flying.