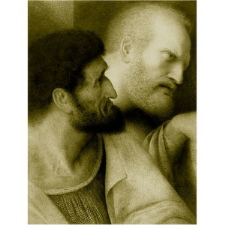 “ And the chief priests and the scribes sought how they might kill Him, for they feared the people. Then Satan entered Judas, surnamed Iscariot, who was numbered among the twelve. So he went his way and conferred with the chief priests and captains, how he might betray Him to them.” (Luke 22:2-4)

“The Da Vinci Code” – The Kennedy assassination – UFOs — It seems as if there is a conspiracy theory for every major event, or non-event in history. Such theories are espoused, promoted and debated. In the passage above we have a glimpse of a true conspiracy on three levels. On a personal level, Judas had been a follower of Jesus for several years but behind the scenes he was motivated by personal greed. There are many aspects of his life and heart that defy easy analysis. But this is knowable, he thought he was doing something for himself but he really became entangled in plot of cosmic proportions. The second level of this conspiracy plays out as Judas became part of the scheme of ruling elite who desired to kill Jesus, but even more damning, he also unwittingly become part Satan’s plan to thwart the ministry of Jesus.

This is a good time to remember that one’s personal disobedience can have wider consequences than we intend. An impulsive act can damage relationships. A careless word can smite a heart. A proud look can crush a spirit. We must ever be on guard concerning our private motivation. I doubt that Judas ever intended the results that followed his picking up the money-bag containing 30 coins, but sin has a way of flowing into the wider steam of damage that has flowed through our race since the garden of Eden.

For Today: Ask God to help you take a good look at what motivates you in life.