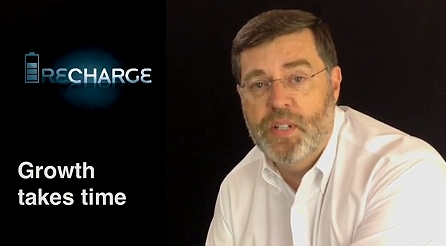 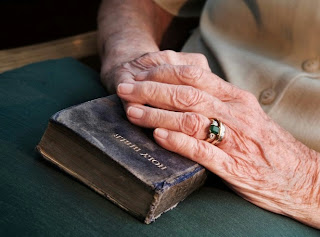 A few years ago, I had the privilege of teaching a weekly Bible study at a housing facility for the elderly.  We would meet in the community room and spend some time in the Word and conclude with a time of prayer.  One particular Wednesday afternoon, a guest joined us to bring us a special blessing.
I was expecting a smaller than usual group for my weekly Bible study since it was stormy day.  We had just begun when she came following her walker up the wheelchair ramp.  She had a rain cap on and her Bible wrapped up to protect it from the steady rain.  No one said anything but we were all silently impressed with her determination and effort to come even in the rain.
The Bible study through one of the Psalms was enjoyable not extraordinary.  Things changed during our prayer time.  The lady with the walker told us she would be 95 if she lived until her next birthday.  She continued to talk and we all listened in rapt attention as she told us the story of her life.   She was born in Eastern Europe and grew up in relative wealth.  She fell in love with a young man that had survived World War I and spent years in a POW camp.  She told us his release and his buying passage through China and Japan by using a few gold coins his mother had secretly sown in the seams of his uniform.
You could see the love in her eyes as she described the dashing young love of her youth.  They were married but after a few brief years of marriage he died suddenly of a heart attack and she had now been a widow for 62 years.
The story continued as she described the horror of most of her family being killed in World War II and the lone brother who survived and later came to the United States.  It was this brother that paid her way to the United States just before the Iron Curtain would prevent any more of her countrymen from leaving for many years to come.
Now she was alone except for a niece and nephew who lived in another state.  Through it all, she did express her love for God in spite of a crisis of faith after the death of her husband.
After the story had been told she said with a sigh that God was not doing her any favors by letting her remain alive.  She felt as though she really had no one and no reason left to live.   After a brief but potent silence, someone in the group offered the reason for her to remain.  Just by walking through the rain on an ordinary Wednesday morning she had encouraged all of us that we can overcome; that we can with God’s help endure all that life throws at us and survive. Her example was what we all needed that day.
David said that he had “…been young, and now am old; yet I have not seen the righteous forsaken, nor his seed begging bread.”  Psalm 37:25.   In the span of a lift time, he had seen the faithfulness of God.   That day we were seeing His faithfulness in the lifetime of one who had lived longer than most of us are likely.  He remains faithful and He always gives us opportunities to serve.   Even if that service is as simple as walking in the rain to unknowingly encourage someone like me.
( I recently ran onto the above – I wrote this about a dozen years ago, and updated it slightly for my blog – a great memory)
Jesse