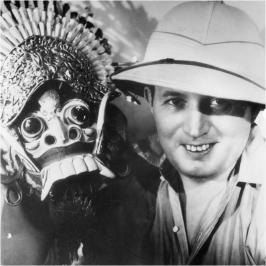 His name became synonymous with the bizarre.  Robert Ripley began publishing his cartoon panel entitled “Believe it or Not” in October of 1919 and for the next 30 years of his life he brought the stories of the strange but true to an estimated 80 million newspaper readers around the world and created a media company that continues until today, more than 60 years after his death, and includes a chain of museums know as “odditoriums” as well as a string of books, games, radio and TV programs.  When an injury ended a budding career in baseball, young Robert turned to cartooning first in San Francisco and then in New York, but it was his expounding the weird and strange that led to riches and fame.  Detailing such notable finds as the man with the world’s longest fingernails, the two-headed calf and shrunken heads, Ripley tapped into something that we often don’t like to admit – the bizarre side of life grabs our attention.  Even if we don’t want to look we can’t help but crane our necks to see a weird sight along the way.  Admit it, we are consumers of the weird.
The title of his long-running cartoon page catalog of the weird contained a challenge.  After one look at the sampling for the day, one must decide to either believe it or not.  Ripley and his talented researchers strived hard to document every item published.  As you might expect, among the mountain of fan mail would come those who challenged a particular claim.   The response was always the same:  an envelope would be sent to the inquirer that contained a card with the phrase “believe it or not” printed on it.
If one moves beyond the standard told-in-Sunday-school stories from the Bible, the all time best seller does have a number of oddities of its own.  Even the standards are a bit wild if you think about it: a man getting swallowed by a fish and living to tell about it, men being unharmed by a fiery furnace, God commanding Abraham to kill his son, and David bringing down a giant with one shot.  Beyond these lie many sensibility-shaking stories that have been tucked into the sacred text since pen was first put to parchment.
For many, the unusual claims of the Bible are used as ammunition to challenge the credibility of its content: why would God speak through a donkey?  How could God use a man who had hundreds of wives? Surly the skeptic would conclude the Bible is of little value to us- that it is simply a collection of out-dated oral history that has somehow survived over a long period of time.
But there is another way to look at the even mind-boggling portions of Scripture.  These stories do have a reason for being that goes beyond appeal of a carnival side-show.  They are to provide a means of God getting messages through to us of vital importance. Perhaps it takes a dose of the strange to get our attention.  Perhaps God knew we needed to have our pre-conceived notions confronted with out-of-the-ordinary events so we would not be able to let the information pass us by.  We would be forced to make a decision to “believe it or not.”
It may take some work, and we may have to get over some shock and work around some head-shaking but if you are ready to take a walk on the wild-side through its pages, you may see the Bible like never before.
For more from Mt. Calvary go here
http://www.CalvaryWV.com
If you want to view the online content from the series “Strange and Bizarre Stories from the Bible” go here:
http://www.calvarywv.com/series/strange/index.html