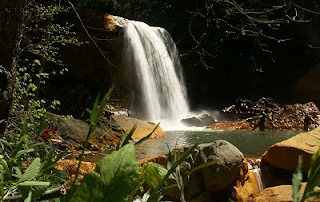 “For this our heart is faint; for these things our eyes are dim. Because of the mountain of Zion, which is desolate, the foxes walk upon it.” (Lamentations 5:17-18)

For two and half hours, earlier this month, Julie and hiked along the North Fork of the Blackwater River in Tucker County, WV. We were strolling along an abandoned railroad grade in search of Douglass Falls, a seldom seen, scenic spot on this river. The picture of above should be proof of our success. We enjoyed the solitude, the sound of the water, and the spectacular scenery of this part of the eastern highlands of West Virginia. (If you want see some more from our trip you can see our entire photo album.)

One unexpected discovery was the land we were walking over was once a thriving community. More than 3000 people live along this stretch of river and mined coal and refined it into coke to ship it downstream to power the engines of progress in the first third of the twentieth century. Once the coal was mined out, the jobs left and the people left and the wildness began to march back into this valley after a period of rapid retreat. We did see a few signs of former habitation, dozens of “coke ovens” still peaked from the hillsides and few foundations of the former time. We passed by Barbershop Falls, so name because a barbershop once overlooked the falls. The falls remain, no barbershop in sight. Douglas, West Virginia is now wilderness again.

Julie spotted a red fox scouting the trail ahead of us. (picture below) This visitor sent my mind scurrying to the Bible passage above. In these verses the prophet Jeremiah used the imagery of foxes walking in the city of God as a proof of desolation, a place of habitation that has now been pruned of people and has been left for the beasts of the field.

It is a sobering thought that some day my home, my city may become a habitat of foxes and begin the reversal to nature. The things I own, the things I build will soon be swept into the dustbin of history and be gone. Does that sound depressing? I hope not, I hope it brings perspective and a little relief. Perspective that only what is done for His glory will last, and only people who are made to last forever are really of value. And relief – why worry so much about stuff, why strive so hard for material success, it really is not that crucial. It will soon be going. Listen you may hear a fox approaching…